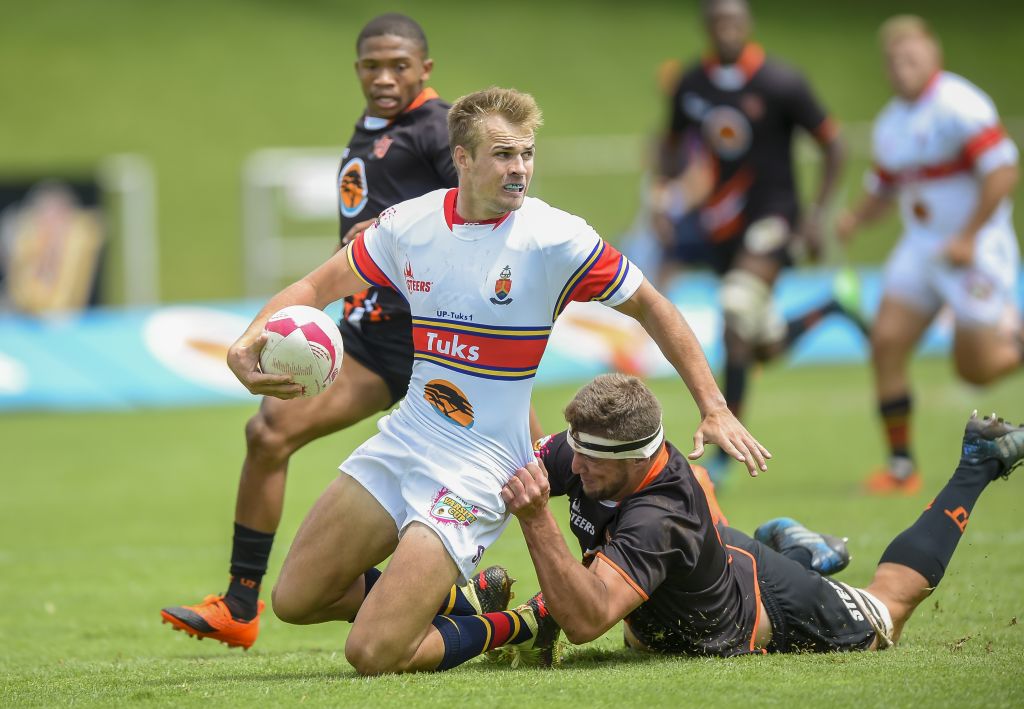 FNB UJ succumbed to their second defeat in as many games as they were outplayed and outclassed by their Gauteng rivals FNB UP-Tuks in the 2019 FNB Varsity Cup on Tuesday afternoon.

Due to load shedding which hit the Johannesburg Stadium on Monday, the Gauteng derby was abandoned, and the fixture played out on Tuesday afternoon. With the match being played behind closed doors, the Orange Army were without their partisan crowd.

The game started at a frantic pace, and it was FNB UJ that got out of the blocks first with sustained pressure. However, the home side couldn’t put any points on the board, and FNB UP-Tuks grew into the game. They were duly rewarded as Wian van Niekerk scored a lekker FNB UP-Tuks try that came after a series of phases, which eventually saw them touchdown. Tinus De Beer made no mistake with the conversion and it was 7-0 after 10 minutes.

The home side got their first points of the game with Jeanluc Cilliers scoring a penalty. FNB UJ were knocking hard on the door and it eventually opened as FNB UJ lock Khanya Ncusane scored a well worked try and flyhalf Jeanluc Cilliers made no mistake with the conversion on the stroke of halftime

But the side from Pretoria were not to be undone and following a ruthless maul from FNB UP-Tuks which saw them gain some ground, forward Ewart Potgieter latched on to a superb pass and scored a try on the cusp of halftime. Tinus de Beer scored the resulting conversion and FNB UP-Tuks went into halftime with a 14-10 lead.

The match was perfectly poised for a FNB UJ comeback however FNB UP-Tuks were just too composed and powered through against the run of play courtesy of a well-orchestrated try by substitute Jacobus Eloff and FNB UP-Tuks were 21-10 ahead after 50 minutes.

The game went from bad to worse for the home side as FNB UP-Tuks were having a ball with the ball, which eventually saw centre Enrich Cronje score and the team from Pretoria were running away with it at 28-10.

The three-time champions were playing some dazzling rugby and were blowing FNB UJ away in their own backyard. Potgieter this time was on a brace as he scored and Tinus de Beer, made the conversion and the game was getting embarrassingly bad for FNB UJ with the score at 35-10.

The mercurial Tinus de Beer then got a try of his own and the score was slowly moving to a big one, nearing half a century. With just 10 minutes remaining FNB UJ were trailing 40-10 in a totally dominant second half performance by their peers. But FNB UJ managed to score a consolation try as fullback Odwa Nkunjana put a little bit of respect on the scoreboard to make it 40-19.

FNB UP-Tuks were guilty of complacency towards the end but held on for an emphatic 40-19.