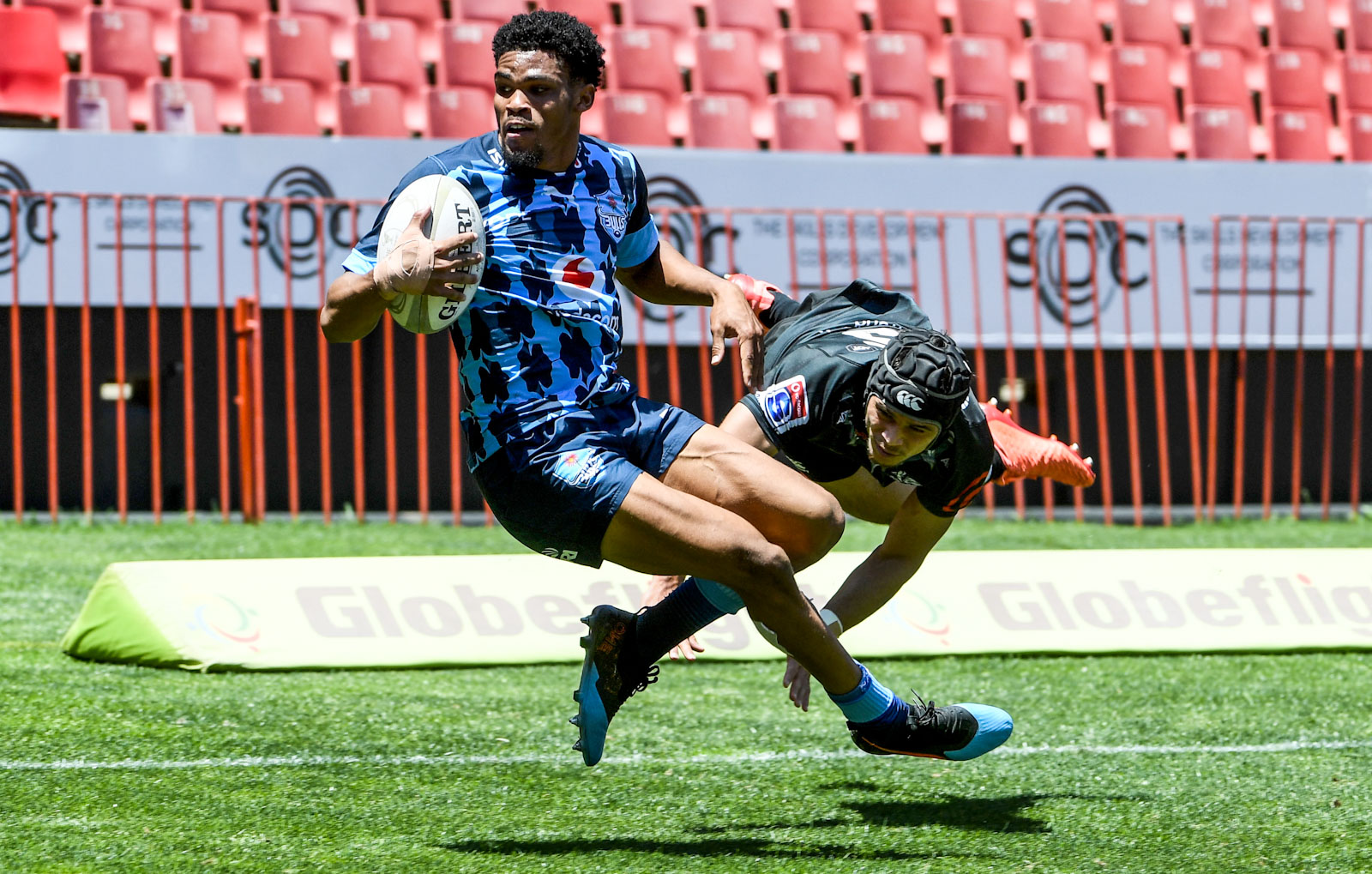 Ten tries, seven of which came in a whirlwind second half of their match against the Cell C Sharks, eased the Vodacom Blue Bulls into a very convincing 72-26 win in their final SA Rugby Under-21 Championship pool game.

The coastal side had no answer to the support play shown by the team in blue, and did themselves no favours with some ill-discipline earlier in the match, which helped the Vodacom Blue Bulls to break the shackles and apply some score board pressure on their opponents.

In fact, the 20-0 scoreline after half an hour of play saw the Cell C Sharks chasing the game from early on.

The KwaZulu-Natalians’ flyhalf, Ryhardt Jonker, had an early opportunity with a long range penalty attempt, but the ball bounced off the upright. Instead, it was his opposite number, David Coetzer, who got the first points after nine minutes in what started a mini-scoring spree from the Vodacom Blue Bulls.

Coetzer then missed two long range efforts before the water break, which saw the Pretoria outfit with a three point lead. The next ten minutes were telling though.

First Stravino Jacobs was worked over in the right hand corner. The Vodacom Blue Bulls attacked well down the blind side, the wing was got the ball in space and he dotted down. Richard Kriel, who took over the kicking duties, slotted the tight conversion.

That lead was extended two minutes later when a Taakir Abrahams kick was charged down by Diego Appollis and his midfield partner, Jay-Cee Nel pounced. The centre kicked ahead and gave Kriel a second and much easier conversion.

After 30 minutes and 17-0 down, the Cell C Sharks suddenly were chasing the game. The Vodacom Blue Bulls, on the other hand, kept their composure and waited for their opponents to make mistakes. And there were plenty, allowing Kriel to slot a penalty goal from right in front with the first half siren looming.

The lanky left-footed Kriel kicked another penalty goal shortly after the restart before a fine try by Appollis extended the lead to 28 points. The outside centre found space on a counter-attack and ran in from 45m, outsprinting the desperate Cell C Sharks cover defence.

The coastal side pulled one back shortly after, when Lucky Dlepu scored. The scrumhalf took a quick tap from a penalty 10m out and stepped past a number of Vodacom Bulls defenders.

Kriel enjoyed his responsibilities as goal kicker and slotted a long range effort after 55 minutes to take the lead out to 31-5.

The Cell C Sharks scored their second try just under the hour mark when Jean Roux (wing) kicked ahead and found the bounce to his favour. Jonker kicked a good conversion from wide out to cut back the lead to 31-12 with 20 minutes to play.

From the restart, the Vodacom Blue Bulls’ hooker Janco Uys scored his side’s fourth try. The Cell C Sharks failed to gather the kick-off, the men in blue pounced and Uys ran onto the final pass to get his third try of the tournament.

A minute later Sebastiaan Jobb ran impressively down the right hand touch to add his name to the score sheet. A turn-over ball saw the Vodacom Blue Bulls attack the blind side and found the wing speeding away from the cover defence for a 41-12 lead.

An hour into the game, Cell C Sharks midfielder Le Roux Malan scored after a strong run and Jonker’s conversion cut the lead back to 41-19.

Jacobs got his second of the match and fifth try of the tournament when he stepped inside his man to dot down in the corner.

Jan-Hendrik Wessels scored their seventh try as the Vodacom Blue Bulls outworked the Cell C Sharks on attack. The ball was moved across the field in a number of phases and Wessels broke the final tackle to dot down under the posts.

Try number eight was another stunner by the Vodacom Blue Bulls when their replacement centre Marnus Potgieter ran a great line from a lineout attack and his pass found Hendrik du Toit (replacement flanker).

A minute later, Ruben Beytell was over as well as the replacement flyhalf ran a great support line to receive the final pass.

Malan scored his second for the Cell C Sharks after a counter-attack from way inside their own half, but that try was of academic nature only.

Wessels just restored the dominance with a quick-tap penalty from close range, getting his second of the half. Kriel’s final kick went wide, but he still managed to contribute 19 points to the Vodacom Blue Bulls’ tally.