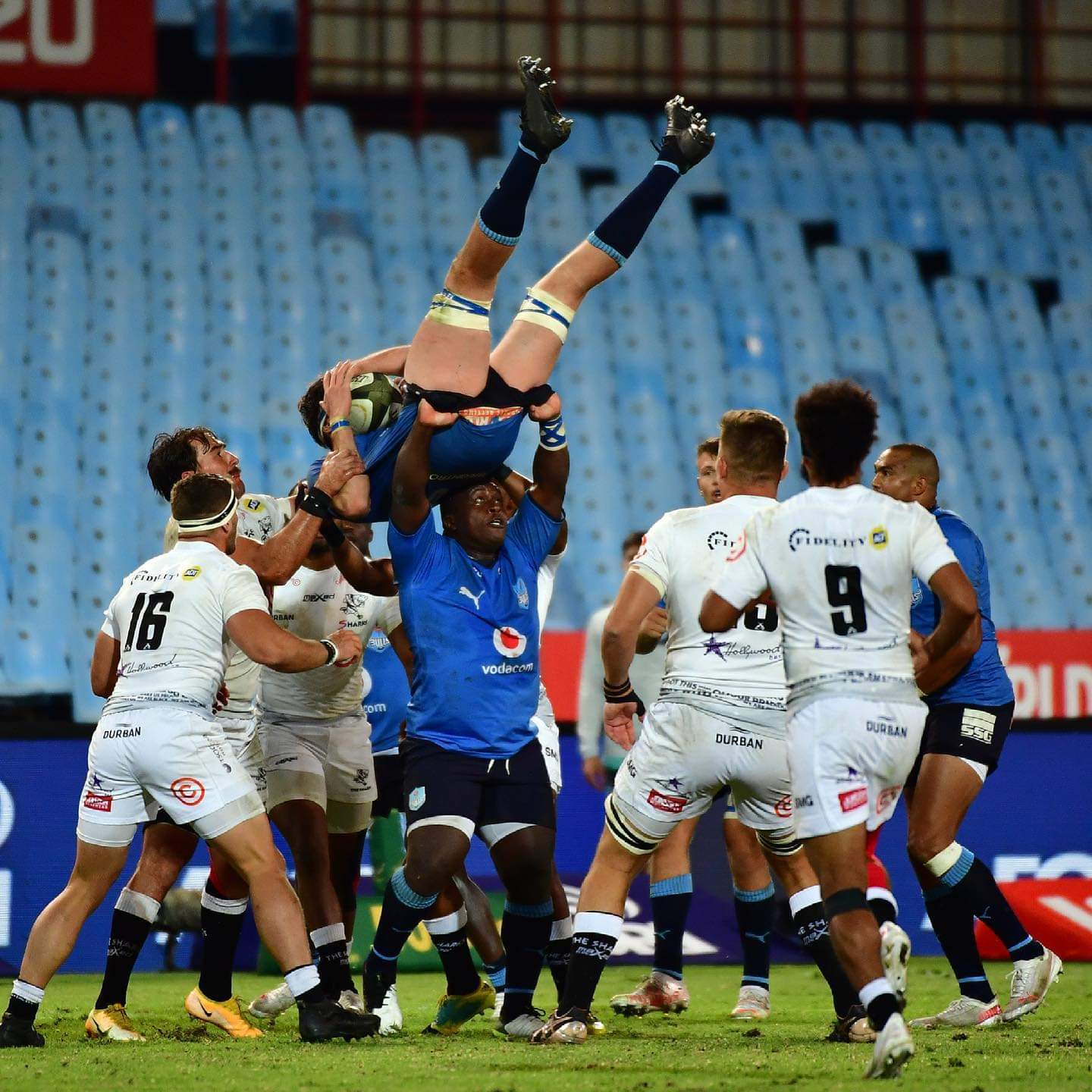 By Dan Lombard16th May 2021No Comments

The Vodacom Bulls leap-frogged the Cell C Sharks at the top of the PRO14 Rainbow Cup SA standings with an impressive victory in Pretoria, while the DHL Stormers broke their competition duck 60km south in Johannesburg during a third round that delivered its fair share of drama.

At the break of the match at Loftus Versfeld, the Cell C Sharks were still in it, but they were totally outdone by a strong second-half performance by the Vodacom Bulls, who scored 31 unanswered points after the break to power them to a 43-9 victory.

The men from Pretoria got a full-house of five log points for their efforts and moved three points past the Durbanites at the top of the ladder.

The DHL Stormers’ fortunes were different at Emirates Airline Park, where they scored 10 points late in the match – the last three via an injury-time penalty goal – to break the Emirates Lions’ hearts with a 39-37 win.

Both sides scored five tries apiece and while the men from Joburg looked to be home and dry when Rabz Maxwane (wing) crossed for their last five-pointer to put them eight points ahead with time running out on the clock, the Capetonians simply refused to give up and ended up sneaking the win.

At the halfway mark of the competition, the Vodacom Bulls lead with 13 log points, followed by the Cell C Sharks (10), DHL Stormers (7) and Emirates Lions (3). Next weekend sees a Jukskei Derby in Johannesburg, while the two coastal sides clash in Durban.

Second half rampage powers Vodacom Bulls up the Rainbow

The Vodacom Bulls claimed a bonus point from four second half tries as they scored 31 unanswered points after the break to underline their dominance in South African rugby.

Morne Steyn (flyhalf) kicked seven out of seven kicks at goal from five penalty goals and two conversions for a personal haul of 19 points as the Cell C Sharks were made to pay for every indiscretion.

Three of the Vodacom Bulls’ replacements in Lizo Gqoboka (prop), Schalk Erasmus (hooker) and Chris Smith (flyhalf), scored tries as well as one for Stravino Jacobs (wing) as the home team found a gear with which the Durbanites could not live.

“We slowly, slowly grounded them down … and I think altitude as well obviously, playing like that (from the Sharks) catches you in the second half,” said Vodacom Bulls Director of Rugby Jake White afterwards.

“It was a little bit frustrating in the first half, but obviously very proud about the way that we finished off, and we got the bonus point.”

Cell C Sharks head coach Sean Everitt was understandably disappointed with his team’s performance, but added that they are far from done.

“I’m really disappointed in how we got dominated, but I don’t believe we can fault our own effort,” said Everitt.

“It’s not the end of the world – you’re bound to lose a game or two when you play six South African derbies. We want to bounce back and win this competition.”

A Tim Swiel penalty goal in injury-time handed the DHL Stormers a narrow 39-37 victory over the Emirates Lions in a tense PRO14 Rainbow Cup SA clash in Johannesburg on Saturday.

Moments earlier, Dan du Plessis (centre) scored his second and the DHL Stormers’ fifth try to put them a solitary point behind the home team, who looked to have sealed the win when Rabz Maxwane (wing) crossed for their fifth five-pointer in the 75th minute.

Leading by a solitary point, the Emirates Lions held onto the ball for a number of phases, but a transgression handed possession back to the visitors from Cape Town on the stroke of full-time.

After getting field position, another penalty against the home team gave Swiel the opportunity to finish a frantic match – that delivered 10 tries in total – in the 83rd minute, with the DHL Stormers taking the lead for the very first time.

“The guys put in a proper effort for the full 80 minutes today and showed a lot of bravery towards the end,” he said. “I thought it was a good contest and credit to the Lions, but I’m very proud of the way in which we never gave up today.”

For his Emirates Lions counterpart, Burger Odendaal, losing at the death was a bitter pill to swallow: “It’s a tough one to take on the chin and really heart-breaking, I thought the guys showed a lot of guts out there but hats off to the Stormers, they played for the full 80 minutes.

“After not converting our opportunities last weekend, I thought we made a step up this week, but unfortunately we still couldn’t get the win, which was disappointing.”