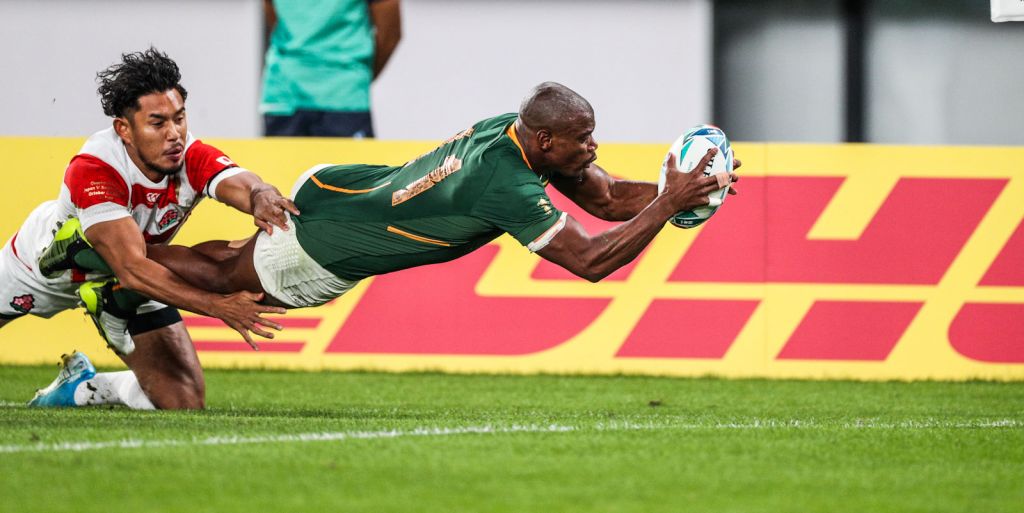 The Springboks will face Wales in the Rugby World Cup semi-final after booking their place in the top four of the international spectacle by defeating tournament hosts, Japan, 26-3 at the Tokyo Stadium in a thrilling quarter-final on Sunday.

The first half was a nail-biting affair as both teams gave everything on attack on defence, and the score reflected this with the Springboks holding a narrow 5-3 lead going into the break thanks an early Makazole Mapimpi try, to only a penalty goal by the Yu Tamura for the hosts.

The Springboks broke away on the scoreboard in the second half as Handre Pollard kicked three penalty goals to add to Mapimpi’s second try and another by Faf de Klerk (scrumhalf), while they denied the hosts from adding to their score in the second stanza.

Mapimpi scored the opening points of the match in the fourth minute thanks to a powerful scrum by the Springboks and smart play by De Klerk, who caught the defence off-guard by opting to pass to the short-side to the Bok left winger, and this paid off as he navigated his way through the defence.

The Springboks were dealt a blow several minutes later as Tendai Mtawarira received a yellow card for a dangerous tackle, which reduced them to 14 men for 10 minutes.

Japan worked their way onto the scoreboard in the 20th minute with Tamura (flyhalf) kicking a penalty goal, and this proved to be the last points of the half.

Both teams came within range of scoring throughout the second quarter, but mistakes and penalties conceded at crucial times cost both sides from adding to their scores.

Pollard kicked a penalty goal four minutes into the second half and added another two three-pointers in the next 10 minutes to give them some breathing space on the scoreboard.

De Klerk scored the Boks’ second try in the 65th minute with a snipping run to dive over, and Pollard added the conversion to hand them a 21-3 lead.

Mapimpi wrapped up his brace thanks to some great passing and support play from a fantastic break by Pollard, which allowed the Springboks to stretch their lead to 23 points with 10 minutes left, and this proved to be the last points of the match, as the Springboks held on for a 26-3 victory.