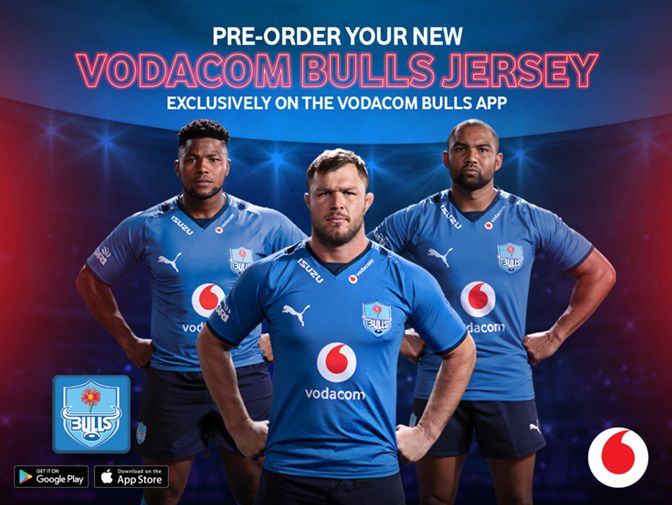 On 7 June 1997, 15 men pulled on a light blue jersey with a daisy over their hearts, ran onto the grass of Loftus Versfeld, and pushed back the might of Northern Hemisphere rugby on a day the British and Irish Lions have never forgotten.

In honour of that 35-30 victory, the Vodacom Bulls have launched a new version of the jersey worn that day. It’s the same light blue colour that is as synonymous with a sports team as the red kit of Manchester United or the iconic white vest of the Chicago Bulls. And this piece of sporting history is being made available by Vodacom for #TrueToTheBlue fans to purchase exclusively through the Vodacom Bulls App from 25 April, for a reduced price of R650.

It’s a decision by Vodacom that has brought a smile to the face of Casper Steyn, who 24 years later is still stopped in the street and asked, “Aren’t you that man?”

Martin Johnson’s British and Irish Lions certainly remember “that man” well. It was Steyn, the left wing and goalkicker for the Vodacom Bulls that day, who led the dismantling of a red machine that was expecting to sweep all before it on the rugby fields of South Africa. Until they arrived at Loftus.

“In the changeroom before that match, we were reminded by our coaching staff exactly who we were playing that afternoon,” recalls Steyn, who that day scored 20 of his team’s 35 points with a try, three conversions and three penalties.

“These were great players you had read about, and now you were playing against them. Staring them in the face. I mean, here was Tony Underwood who plays for England, and here I am running out against him at Loftus. For a lot of us in the Bulls team that day, it was a great honour. And it felt quite surreal. Last week you’re playing a Currie Cup game, and then suddenly this week you’re playing the British and Irish Lions.”

Steyn says that at the core of everything they hoped to achieve that afternoon was the famous blue jersey they wore.

“I was nervous as hell. I was the rookie on the team that day compared to some of my more experienced teammates. You don’t know what’s going to happen when you run out onto that field. But we all wanted to give a good performance. As individuals, and as a team. We wanted to keep the Bulls name high. You grew up loving that blue jersey and wanting to wear it. I remember in 1991 how as a 17-year-old I went with my dad to watch the Bulls play Transvaal. And it was at that match that I told my dad, ‘I want to play for this team’.

“And then when I did get the chance, my first match was against the Lions at Ellis Park. I remember the build-up. Here were Springbok legends such as Reuben Kruger, Joost van der Westhuizen and Krynauw Otto, and when we pulled on the blue jersey they were my teammates. That was unbelievable for me. You’re on the bus to the game and you are one of them because of that blue jersey.

“That jersey will always stand out for me, and the loyalty it inspired. You played rugby just to be able to wear that blue jersey. To me it literally felt like you played for that blue jersey and what it represented. As a team you took your knocks in that blue jersey, and you fought your battles in it. You wanted to be better in that jersey, and to not let your teammates down. I wouldn’t trade that experience for anything in the world.”

Years later, and the current generation of Vodacom Bulls stars feel the same.

When wing Cornal Hendricks was given his first exclusive look of the new Vodacom Bulls jersey, he knew exactly what it represented even though he was only a teenager when Steyn and the Bulls dismantled the British and Irish Lions.

“This jersey goes back a long way. The colour reminds us all about the teams before us and the players who wore this before us. It feels great to represent this proud union in this traditional jersey. I think the former Bulls players will really feel a lot of pride as well, and it will bring back a lot of memories for them.”

Memories of a Saturday in June. At a stadium in Kirkness Street, Pretoria. And of a day when 15 men pulled on a light blue jersey, and held back a rugby empire.