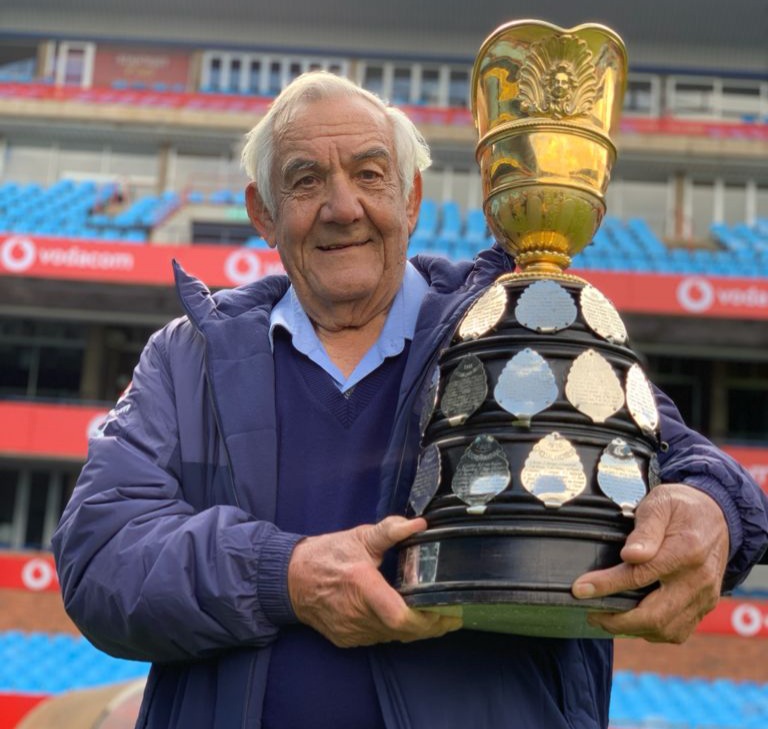 By Dan Lombard31st May 2021No Comments

Frik du Preez, Northern Transvaal (Blue Bulls) Legend and SA’s Player of the 20th Century, was honoured on Monday by the Blue Bulls Rugby Union when the Northern Pavilion at Loftus Versfeld was named after the former Springbok lock.

‘Oom’ Frik, who spent most of his career at lock or on the flanks, was born on 28 November 1935 and represented Northern Transvaal and the Springboks. He represented Springboks on 87 occasions and scored a total of 87 points while in the green jersey.

Du Preez made his test debut for the Springboks on 7 January 1961 on the flank against a powerful English team at Twickenham. He played his last test on 7 August 1971 at the age of 35, wearing the number 4 jersey, against Australia at the Sydney Cricket Ground.

He was an excellent all-round footballer that often left crowds and opposition in awe of his skills. The rugby history books record one of his most memorable moments as “DIE DAG WAT FRIK DU PREEZ GEDROP, GEPLACE EN GESCORE HET”…  which describes the 1969 Currie Cup final between Northern Transvaal and Western Province. ‘Oom’ Frik put in a masterful performance that is still talked about today. The legendary lock managed to score in every manner when he kicked a penalty and a drop goal, before scoring a try and converting it. Northern Transvaal won the match 28-13.

Although he was not particularly tall, standing at 1.89m, he was a tower of strength in the line-out. In addition he had a fantastic turn of speed and fine running skills with ball in hand, as he showed in the try he scored against the British Lions in 1968.

According to Willem Strauss, president of the Blue Bulls Rugby Union, honoring ‘Oom’ Frik further enhances the strategy to keep their values, traditions, and history strong. This also includes bringing back the light blue jersey, the Daisy and making the Carlton League strong again.

“Oom Frik is an all-time legend and thanks to him, the players before him and those that followed, Loftus Versfeld and the Vodacom Bulls became iconic in the world of rugby.”

Frik du Preez said that this accolade was a tremendous honor for him, and he would like to thank the BBRU for honoring him in this way, “I see this as a tribute to all former Northern Transvaal and Bulls players. Rugby is a team sport, and without my teammates, I would not have been able to achieve the success I did.”

Renaming the North Pavilion after Frik du Preez, forms part of the upgrading of the pavilion which will also include a Bulls Museum.