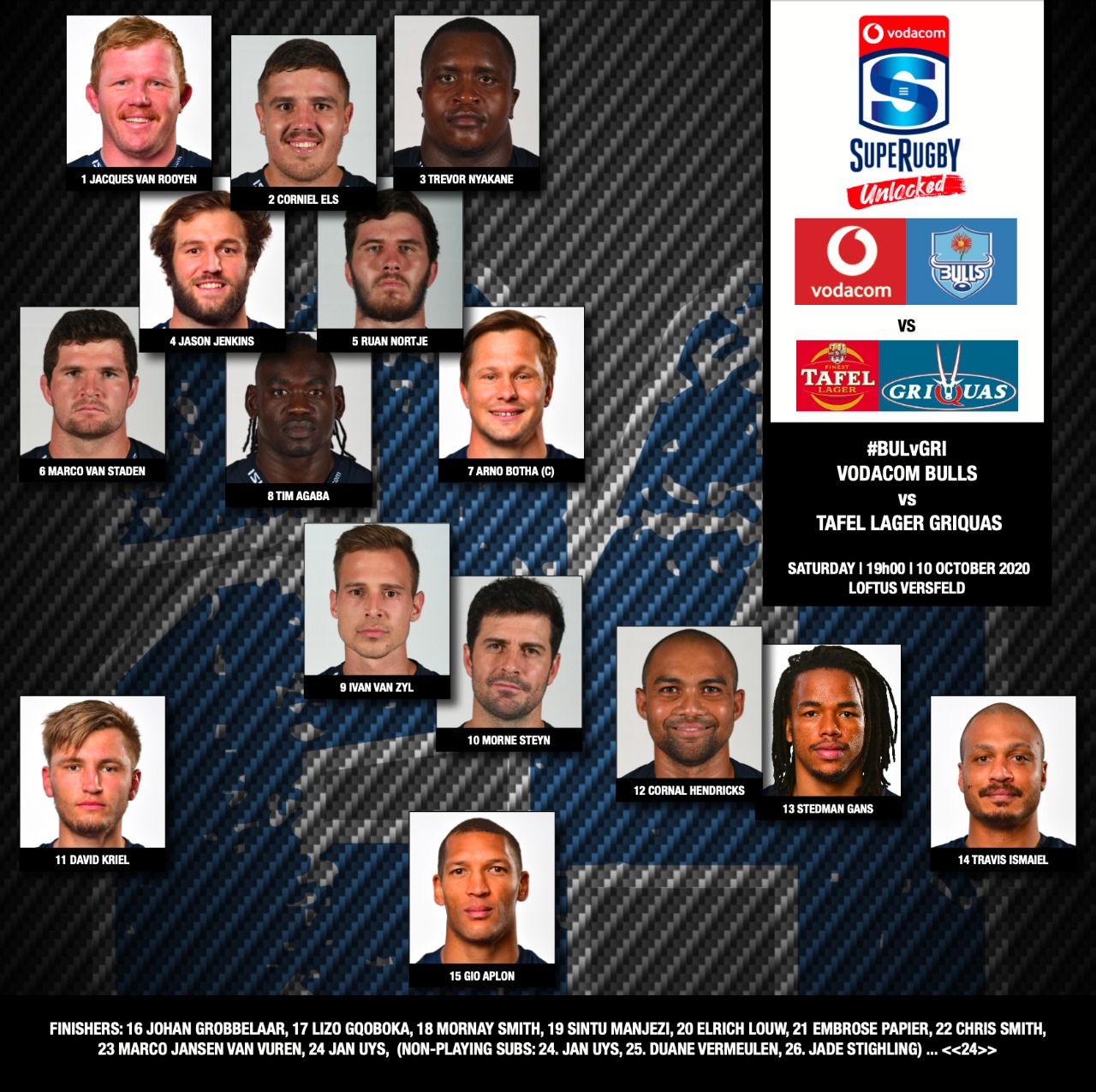 Experienced loose forward Arno Botha will lead a Vodacom Bulls team jam-packed with Springboks, Blitzboks and Junior Springbok talent against the Tafel Lager Griquas in the opening round of Vodacom Super Rugby Unlocked at Loftus Versfeld on Saturday, 10 October 2020.

The backline remains relatively unchanged from the Vodacom Super Fan Saturday team that was triumphant against the Cell C Sharks two weeks ago.

The only change sees the fleet footed David Kriel starting on the left wing as he makes his debut for the Vodacom Bulls.

Springboks Gio Aplon, Cornal Hendricks, Travis Ismaiel, Morné Steyn and Ivan van Zyl are expected to shine on game day as their collective experience and ability to break the defensive line will be a cornerstone on attack.

Amongst the forwards, Blitzbok Tim Agaba starts at no.8 where he links up with Springbok flankers Botha and Marco van Staden while locks Jason Jenkins and Ruan Nortje continue their partnership in the second row. Regular skipper Duane Vermeulen picked a slight knee niggle last weekend and is been rested as a precaution.

The front row will be propped up by the forever smiling World Cup winning prop Trevor Nyakane and Vodacom Super Rugby stalwart Jacques ‘Policeman’ van Rooyen, who will also be making his Vodacom Bulls debut.

The bench is no different in terms of explosive talent with Springbok prop Lizo Gqoboka and Junior Springbok Johan Grobbelaar at hooker eager to return to action after injury layoffs, while lock Sintu Manjezi, flank Elrigh Louw and flyhalf Chris Smith are also set to make their Vodacom Super Rugby debuts.

“It’s been months of preparation and weeks of training with the players and management excited to get going. We have a mission, we’ve set high standards and now is the time for the Vodacom Bulls to stamp their authority on the this competition,” said Vodacom Bulls Director of Rugby, Jake White.

“The experience amongst our players allows us to implement our game plan quickly and with a solid foundation. I’m extremely excited for all the players making their debuts and looking forward to watching them grow,” he added.