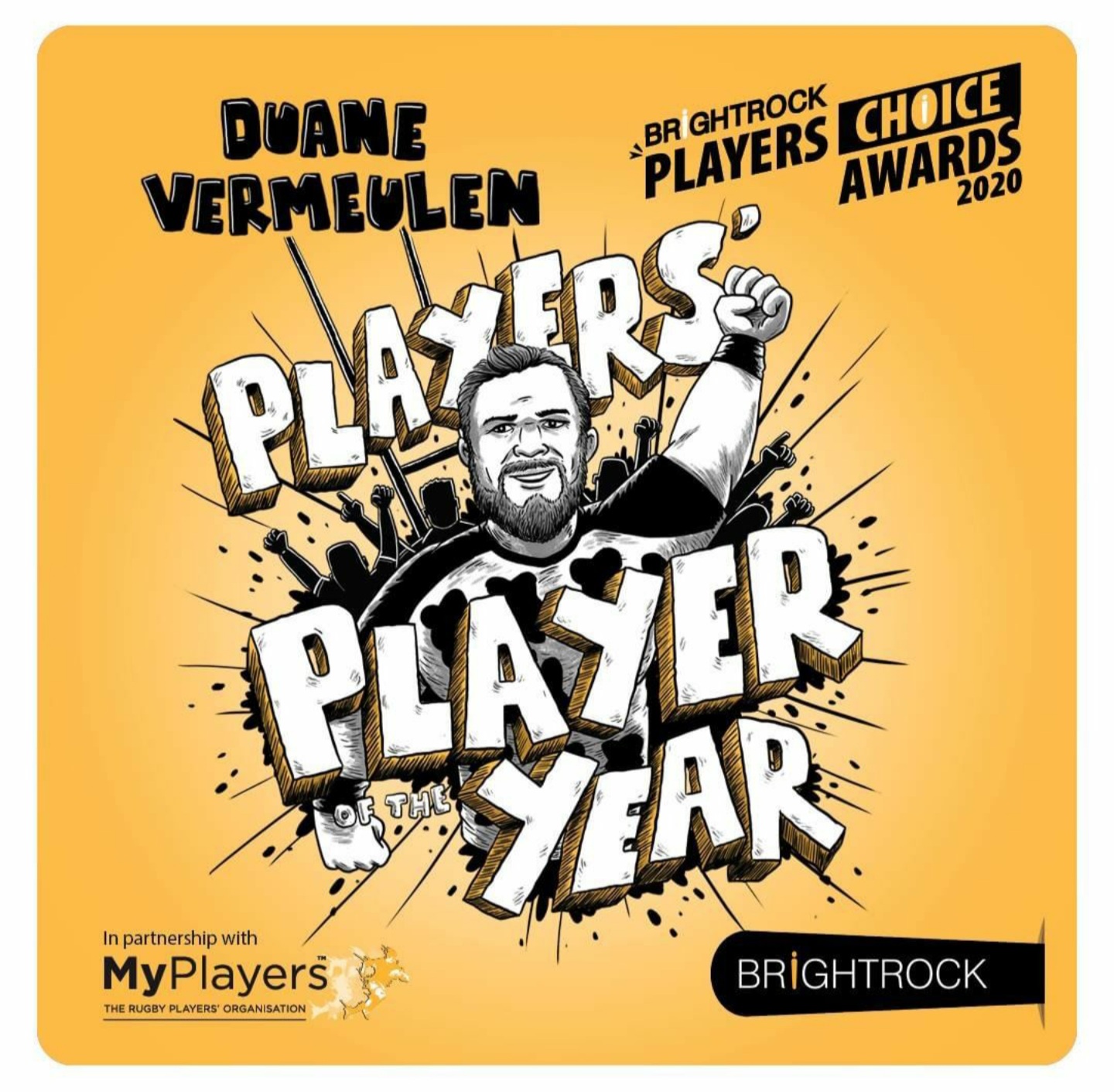 By Dan Lombard11th Mar 2021No Comments

A sports team cannot be successful without a joint effort to achieve a positive result. And, just as a rugby team needs the efforts of every teammate to fulfill its mission, it also needs opponents.

In 2020, rugby players, like other sportspeople, faced some of their toughest opponents yet: the pandemic, a more intense schedule and the absence of spectators. But amidst all of this, the players never quit; instead, they displayed immense resilience and endurance.

Bearing this in mind, the fourth Annual BrightRock Players’ Choice Awards are all the more important, given the tough environment of 2020.

These awards, presented in a partnership between MyPlayers and BrightRock, honour and recognise the commitment, determination and talent of South African rugby players.

The title of Players’ Player of the Year is awarded to the player selected by their peers as the best rugby player of the year.

A week ago, Vermeulen was named SA Player of the Year during the SA Rugby Awards, and this is the second time (including 2014) that he receives South Africa’s two most coveted player awards in a single year.

Eugene Henning, Chief Executive Officer of MyPlayers, remarked, “Duane had an amazing season, despite the barriers presented by the pandemic, and his two awards tonight reflect this. On behalf of MyPlayers, we would like to congratulate all the winners who contributed to the game and entertained us with the great rugby that they have played this past season. Rugby remains one of the most popular sports in our country, and we are fortunate to have a committed partner in BrightRock that makes it possible for the players to have this platform where they can recognise their peers. Many thanks to BrightRock and our MyPlayers team for the great work they have done over the last four years to produce these awards.”

As the winner of two categories, Vermeulen pledged his total winnings of R10 000 to the Chris Burger Petro Jackson Players’ Fund.

“Assisting those in need is something close to my heart, and I couldn’t think of a better way to assist those in need than donating my total winnings to the Chris Burger Petro Jackson Players’ Fund, which has been rugby’s caring hand for over 40 years. My donation is a small token of appreciation and an opportunity to thank the Players’ Fund for the pivotal role they play, in caring for the South African’s who suffer life-changing injuries through rugby. Hopefully, my donation can make a change in one person’s life,” Vermeulen said.

The other winners who best played the bounce during this challenging season and received the recognition of their peers, are:

Defender of the Year: Lukhanyo Am (Sharks)

The LoveChange Award (for the most improved player): Vincent Tshituka (Lions)

About Am, Henning said, “Lukhanyo is a very reserved individual off the field but that sense of calmness translates to confidence and focus in his own game as well as that of the players playing alongside him. He has for some time now been the pillar in the Springbok and Sharks’ defense structures at the back, and being voted as Defender of the Year comes as no surprise to me.”

“Then, one should also remark on the great evening the Lions had at the BrightRock Players’ Choice Awards 2020. All three their nominees won their respective categories, and they had stiff competition. Wandisile Simelane adds tremendous depth to South Africa’s stock at outside centre, and his attacking instincts are a delight to behold. Morné van den Berg typifies the jack russell attitude often ascribed to scrumhalves, and his impact off the bench was immense. Vincent Tshituka – yet, another outstanding South African loose forward! The past year has been the most disruptive in the history of professional rugby, and to be able to play the best rugby of your career under these circumstances, says a lot about one’s resilience and attitude towards the game and life in general. All five award winners, along with the other nominees, thoroughly deserve the recognition bestowed on them by their peers.”

BrightRock Deputy CEO, Suzanne Stevens, says, “One thing South Africans know is how to stand strong when it comes to change. At BrightRock, we believe that with all change, there is an opportunity. Being able to ‘love change’ is a skill we as South Africans possess, we’re naturally a ‘change fit’ bunch! That is why these awards are important and a necessity during these unprecedented times. They are our way of honouring our players for their resilience and for inspiring us amid all the changes that are happening in the world today.”

Sport, which is inherently unpredictable, provides the perfect platform to share the message of embracing change and tackling the unexpected head-on. In BrightRock’s partnership with MyPlayers, the power of sport to drive positive change has been harnessed by acknowledging the amazing triumphs made by South Africa’s top rugby talent.

All nominations were compiled by the MyPlayers Board, their Trustees and player representatives, and the winners of each category were selected by the players.

The winner in each category also earns the charity of his choice a R5 000 donation, funded from the players’ collective commercial rights income and managed by MyPlayers.