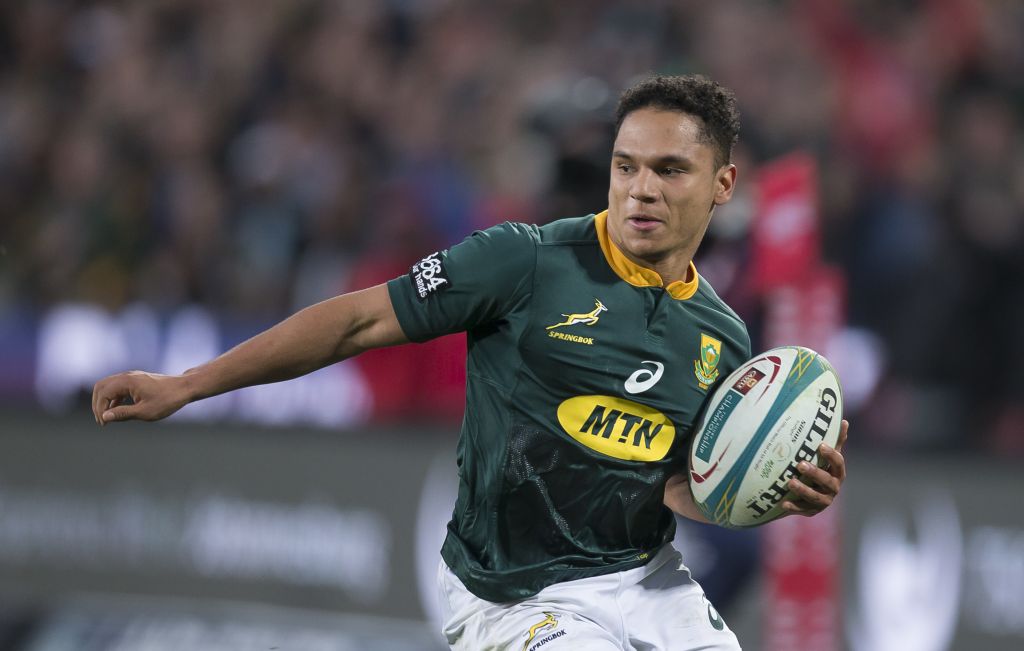 A Springbok blend led by Siya Kolisi and combining youth with gnarled experience was on Monday confirmed to launch South Africa’s seventh assault on the Rugby World Cup title.

The squad naming was broadcast live by several national broadcasters in front of an excited audience at Multichoice City in Johannesburg. The team departs to Japan on Friday.

Fourteen of the squad made their Test debut since the last tournament in 2015, while six of those have been capped in the past two seasons since Rassie Erasmus, director of rugby, took over the team’s coaching duties. The half dozen are Herschel Jantjies, Cheslin Kolbe, Sbu Nkosi, Makazole Mapimpi, Kwagga Smith and RG Snyman.

There are five players with more than 50 caps – Eben Etzebeth, Willie le Roux, Louw, Steyn and Mtawarira – the latter being the most experienced played in the squad with 110 caps.

“I am very happy with the squad we have been able to select” said Erasmus.

“We have been developing this squad since the start of last season and in the 31 we have a good balance of established experience and some exciting youth.

“We set out with the goal of growing the depth of the squad and I am confident that any of this 31 can step into a play-off match at the Rugby World Cup and deliver an outstanding performance.”

The Springboks have given opportunities to 60 players in 18 Tests in the past two years to arrive at their 2019 combination.

All 31 – apart from Kolisi who only returned from injury nine days ago – appeared at some point in the Castle Lager Rugby Championship-winning campaign.

The squad is split between 14 backs and 17 forwards and only seven have fewer than 10 caps – Lukhanyo Am, Warrick Gelant, Jantjies, Kolbe, Nkosi and Smith.

“We’ve been working towards this moment for the best part of two years and we’ve been lucky in achieving most of our goals this season,” said Erasmus.

“We’ve been able to give everyone in the squad some good game time as well as develop combinations with squad rotation and not lose momentum as we go to the World Cup.

“But the results and performances up to now will mean nothing once we are in Japan. It is a case of back to square one; putting in the work on the training field and in the planning sessions to build on what we have achieved.”

The Springboks open their Rugby World Cup campaign against New Zealand in Yokohama on Saturday, 21 September before further Pool B matches against Namibia (28 September), Italy (4 October) and Canada (8 October).

It will be the first time the Springboks have met Namibia since 2011 and the first meeting with Canada since 2000. The Springboks have beaten Italy 13 times in 14 meetings and, after a long period of New Zealand dominance have restored some balance in the past four meetings – none of which was decided by more than two points.

“We have planned and trained to be competitive at the Rugby World Cup and the work we have done and the performances to date this year have put us into a good space,” said Erasmus.

“Rugby World Cups are usually decided by small margins – a foot in touch here or a referee’s call there – but we have a very good squad that has grown into a tight unit over the past few months and we have definitely grown stronger together.

“I’m sure I speak for the squad when I say we can’t wait for the games to begin.”

The Springboks will play a final warm-up match against Japan on Friday, 6 September in Kumagaya.

The Springbok squad is (in alphabetical order): 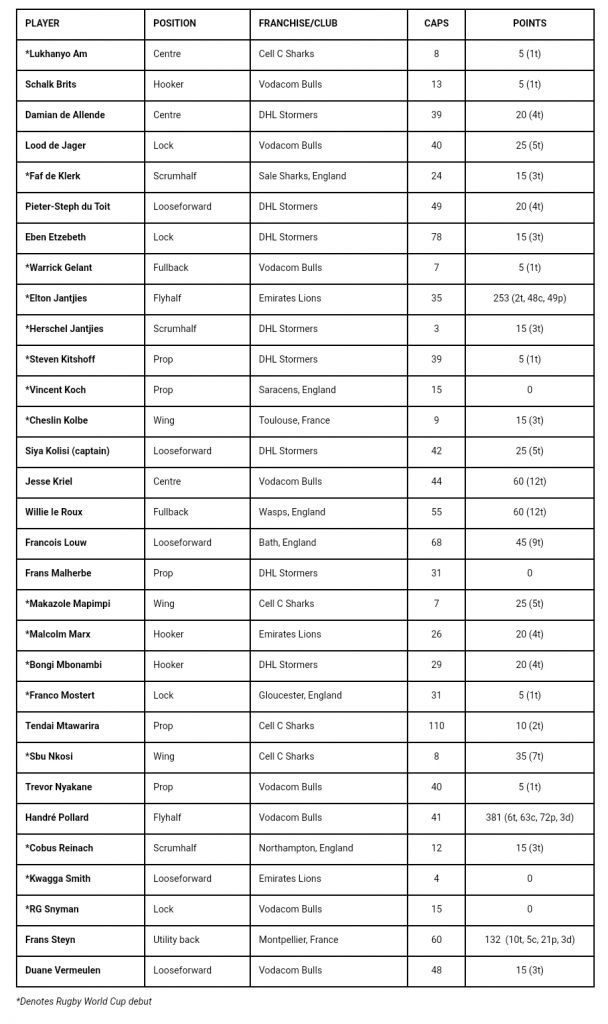