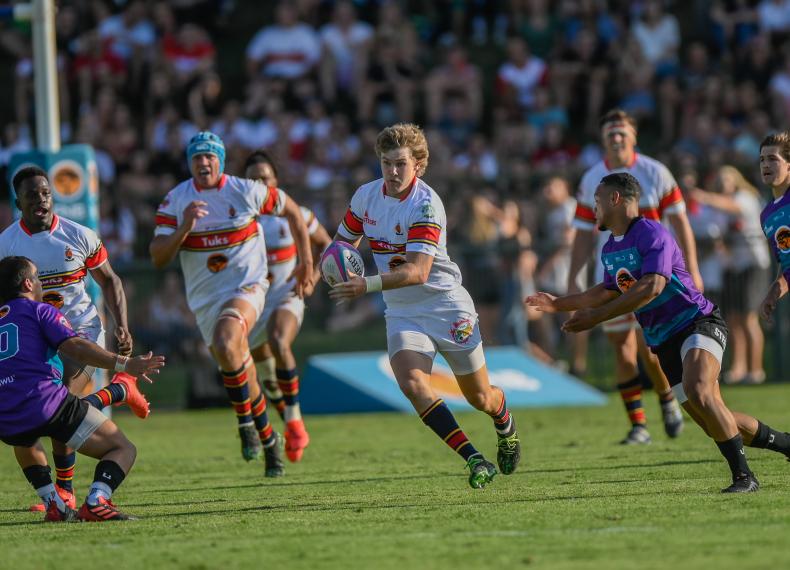 Whether they settle on nicknaming him ‘The Boot’, ‘Mr Cool’ or another variant, one thing FNB UP-Tuks rugby supporters will know is that Theo Boshoff is going to have an all-round impact on the Stripe Generation’s prospects during the 2020 FNB Varsity Cup season.

That much is clear after the flyhalf, on his FNB Varsity Cup debut against FNB NWU on Monday, totted up a 23-point haul (three penalties, 3 conversions a try and a drop goal) to help UP-Tuks win a to-and-fro tussle – 42-40. Most significantly, that ‘Fiela’ slotted the winning penalty through the posts in the dying minute proves he has got big match temperament.

Boshoff seems to easily take to the role as a game-breaker. Last year he was instrumental in helping the Bulls win the SA Rugby Under-21 Championship. During the final against Western Province, he scored 18 of the Bulls’ 33 points. Prior to that, UP-Tuks won the FNB Young Guns tournament in 2017.

He has been chasing after balls ever since he can remember and getting to watch his heroes on television indeed served as extra motivation to try and never drop the ball. In fact, when he was a little laaitie, one of the perks was getting to play touch rugby ‘Tests’ on Sunday in the park with his older friends. Arguably, being one of the smallest players on the park are what helped him to think on his feet.

The second year BSc Sport Science student matriculated at Paarl Gymnasium. A big highlight at the time was helping his team to win the annual derby against Paul Roos (28-24). What made it extra special for him was that his opposite number on that day was the now Springbok Damian Willemse. Thereafter a decision awaited Boshoff about here to continue his development in the game, and the 21-year-old believes he made the right choice in Pretoria.

“Getting to play for the Bulls changed my whole perception as to what the role of a flyhalf should be,” Boshoff tells TuksSport Media.

“While at school, I was a running flyhalf. During the last three years, I developed into a more complete flyhalf. I can adapt to whatever is required from me during the game. I am certainly tactically more astute knowing when to kick and when to run the ball.”

The Springbok flyhalf Handré Pollard might not know it, but he also has had a significant influence on how Boshoff thinks as a flyhalf.

“When I was a Grade 8 learner, Handré was playing for Paarl Gym’s first team. I remember being astonished as to how far he was able to kick a ball. At first, I did not think it was possible. Of late, I have been trying to base my play on the way he is doing things.”

Drop goals seem to have become somewhat of dying art in South African rugby; therefore, it was exciting on Monday to see Boshoff slot one over. During last year’s national Under-21 final he was also able to do so.

“Dropgoals is a vital facet to my game as I play to win every time I take to the field. Being able to execute a drop goals means that I got another way to make sure the scoreboard keeps on ticking over.”