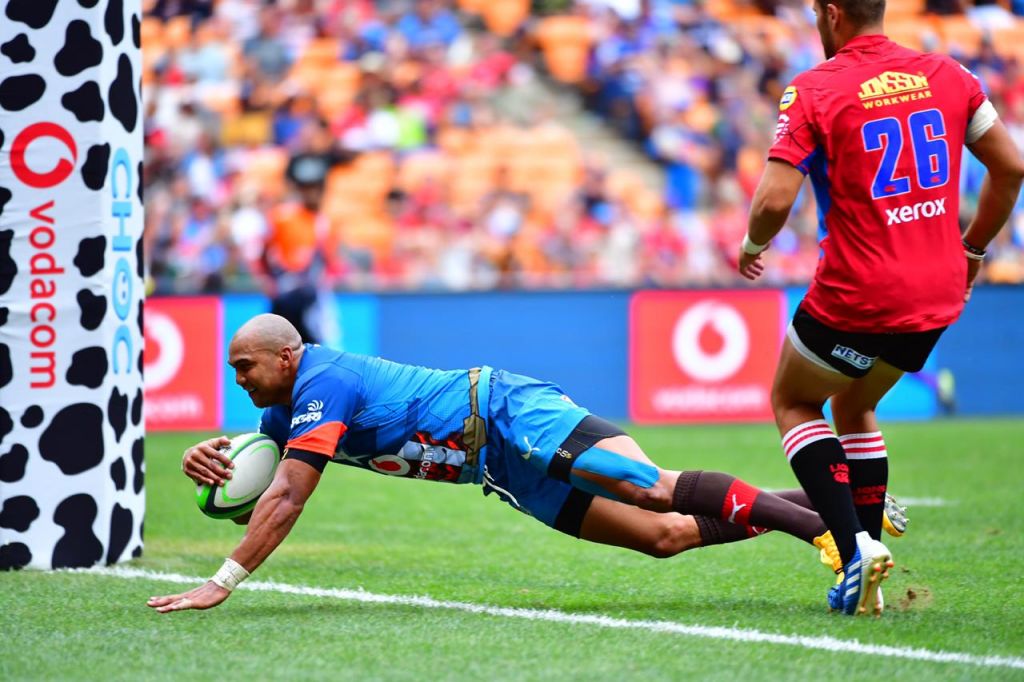 Vodacom Bulls pull result out of the bag against Emirates Lions

The fairytale story of Vodacom Bulls utility back Cornal Hendricks continued at Vodacom Super Hero Sunday as he scored a perfect poacher try to give his side a hard-fought 40-35 win over the Emirates Lions in an entertaining game.

While defence wasn’t the order of the day, Hendricks – playing in the unfamiliar position of outside centre – showed that this is definitely an option for coach Pote Human. His work-rate and physicality was exceptional on the day, even if his finishing wasn’t quite right all the time.

A minute before Hendricks scored, he fluffed the easiest of chances with an open tryline after two-try hero Divan Rossouw had done all the work and passed the perfect inside pass into the bread basket. Hendricks grappled too quickly and dropped the ball, robbing him of the easiest of tries.

It was the same in the first half where he fluffed another easy try, with an open tryline in front of him, but when it mattered he came right, and continued his fairytale return to the game.

The try came as a result from a bad pass from a Lions scrum under pressure, and the wayward pass dropped in Hendricks’s lap, and he made no mistake from close range.

The Bulls were lucky though as Morne van der Berg almost stole the game away from them in the dying seconds, but was bundled out to touch a metre from the line.

On the whole the game was superbly entertaining for an opening fixture for the season and while the rust was there, the exuberance of the players on both sides made for a good afternoon’s rugby that capped the Super Hero Sunday in a great way.

Earlier, it looked as if former Bull Duncan Matthews would be the Lions’ hero after a brace of tries shocked his former teammates and caused celebrations.

Matthews was one of seven former Bulls on display for the Johannesburg side and to say the tries were enjoyed a bit more than normal would be an understatement.

It was the Lions that struck first, a beautiful move off the back of a scrum in the midfield that moved left, and Dan Kriel found just enough space to ghost between defenders and run in a good solo try.

The Bulls’ forwards stood up and manned up shortly afterwards, with Abongile Nonkontwana ending at the back of a rolling maul to level the scores, before the Matthews show took centre stage.

The first try was a trademark intercept from the winger, which he has done countless times at junior level, as he timed his run perfectly to take a poor pass and run 75 metres to score.

The second came as the Lions were down to 14, losing hooker Pieter Jansen to repeated infringements in the red zone.

When the Bulls fluffed the corner kick, the restart was cleverly angled away from the waiting forwards, bouncing perfectly for Jamba Ulengo to take with one hand on the sideline and put the burners on, passing inside to a flying Matthews who went over to score.

The Bulls produced a stunning bit of interplay themselves as short pass between Hendricks, Nonkontwana, Libbok and then Johnny Kotze found the spot for Kotze to score a vital try just before the break and leave his side 21-14 down on the halftime whistle.

The punching and counter punching continued in earnest in the second with the Bulls striking the first two blows, with the first coming from Libbok who scooped up a loose ball and flummoxed the defence on the angle to saunter in untouched to level the scores again.

Then the Bulls produced a left-hand wave with men aplenty as they used the overlap to send Divan Rossouw over in the corner to reduce the deficit to two points for the Bulls.

The Lions weren’t done and found their spirit, hitting back twice to put up a nine point lead in the contest. First a pinpoint cross kick found Courtnal Skosan and then Tyrone Green found space to put Morne van der Berg away for a try under the posts.

Rossouw showed unbelievable resolve to finish his second try, getting tackled on the touchline five metres out but twisting and turning and powering his way over the line to bring the Bulls within two.

And then Hendricks had the final say, bowing to the crowd to thank them for the try, and for another chance at rugby redemption.