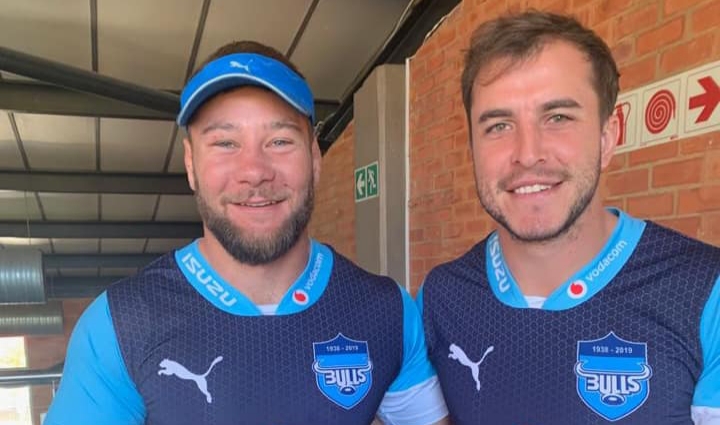 A leadership that started at U7 level

The duo started playing club rugby in Johannesburg when they were just seven years old and they have been inseparable ever since, both on and off the field.

The inside centre and flanker continued their rugby story into high school as they led Hoërskool Monument’s 1st XV in their Matric year with their leadership qualities making it an easy choice for them to lead the Golden Lions’ Craven Week team later that year before moving across the Jukskei to lead the University of Pretoria’s Young Guns to glory.

Odendaal and Steenkamp have cemented themselves as regular members of all the Vodacom Blue Bulls teams they have represented with both having captained the union at various levels. Odendaal reached the pinnacle of provincial rugby when he captained the Vodacom Bulls in 2018.

They have an incredible understanding of how the other operates and feed off each other’s strengths to get the best out of their team on any given match day. This is not only down to their rugby acumen or leadership traits but also because they are the best of friends off the field.

“We’ve lived together in the TuksRugby House and the junior rugby houses at the Vodacom Blue Bulls, we braai together and regularly go hunting together. We train and play together. We’ve helped each other overcome setbacks in our career including serious injuries. We’ve attended weddings and bachelors. We’ve won trophies and lost matches that we needed to win. We’ve been welcomed into each other’s families as if we’re blood related. We share a really special bond and I’m proud to call Stoney my friend, fellow player and vice-captain.”

Steenkamp reflects on his friendship with Odendaal with great fondness and is excited about what the future has in store for them.

“Burger has been a good friend of mine since our earliest playing days and our bond has grown from strength to strength. His support has been invaluable and I could not ask for a better man to lead our respective teams with,” said Steenkamp.

“I look forward to our continued partnership, both on and off the field. At the rate we are going, our future children will be the best of mates but for now, we are focused on leading the team to a potential Currie Cup title,” he added.

The two players will need to use all of their leadership arsenal to ensure that the Vodacom Blue Bulls return to winning ways when they host the Toyota Free State Cheetahs at Loftus Versfeld this coming Friday, 19 July 2019.

Kick-off is at 19:15 and tickets can be purchased online at bulls.ticketpros.co.za or at the stadium ticket office.